Welcome to Anti-Semantism, a section of Angry Autie that tackles language use, especially as it pertains to autism. Words are very profound and powerful things. People know this in the abstract but yet continue using words imprecisely. It may seem like what I’m doing here is just nit-picking to most people but I find the way that people use words to be extremely revealing, more revealing than they may want. It is possible to call people out on bullshit based on their word-choice. I believe that a lot of problems arise from a misunderstanding in communication, which people with autism supposedly lack. In Anti-Semantism, there’ll be diatribes against certain terms, an analysis of how certain terms are used, and more. Any topic that is about language use in autism discourse will fall under the “Anti-Semantism” label. 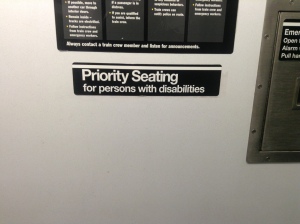 Back in my plea to stop calling autism a disorder, I mentioned something in passing about how it’s sometimes referred to as a disability and how that’s a fundamental misunderstanding of the nature of autism. Basically, I state that autism is a give or take scenario. “Disorder” is a shitty word but “disability” is merely a misunderstanding, as great a misunderstanding as it may be. I’m going to expand on that here.

A disability, according to the dictionary, is “a physical or mental condition that limits a person’s movements, senses, or activities.”

Okay, fine. I accept that we are limited in some respects. For example, I still can’t organize sonic sensory input very well; I hear everything almost equally all at once, which is really frustrating. When I talk to someone, I’m sometimes distracted by a nearby conversation, not because the conversation is interesting but because it’s there; I am unable to filter that conversation out.

But because I’m disabled in some aspects doesn’t make me disabled in general. There are things that autistic people can’t do but there are things that normal people can’t do either, or at least are severely limited in. Neurotypicals are usually pretty stupid, they’re conformists, they routinely lie, they fall prey to far more biases, they’re arrogant (just read any history book for evidence of this one), they don’t know how to be alone, they speak in the vaguest possible ways, and they routinely suffer from false memories. I didn’t even fully realize that false memories were a thing until I took a course in cognitive psychology in college.

But in due course, I think that to see autism as a disability is to ignore the incredible variability and diversity of the human race. The fact that labels like ‘disability’ exist suggests that we have to be a certain way in order to be human and the idea of being this perfect human has been something that has built up a lot of tension in me over the years. It’s much like what women face since they receive mixed messages, which are usually unrealistic to begin with, from all sorts of sources on how to be a woman. The ‘disability’ label suggests that I’m a failed human because I am unable to live up to my potential and a lot of people think of autistic people this way, which I find very depressing. When I mention the 1 in 50 stats to people while masquerading as a neurotypical, the reaction I get is “I know, isn’t it horrible?”

In my experience, autistic people are probably more able to live up to their potential than most normal people. My theory is that neurotypicals feel emasculated because these weird-ass psychotic-looking autistic people are realizing themselves quite fully and take on their interests more intensely and passionately than most people. Man has now crossed over into a neuroimperialism (although there’s a neuro-everything these days). Have you normals learned nothing?

One thought on “Anti-Semantism: Yes… “Disability”…”