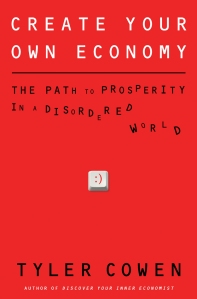 You’ve probably met a pseudo-intellectual person at some point who is interested in absolutely everything. No knowledge is too random, useless, or obscure for this person. And he LOVES sharing it and will seize any opportunity he gets to show off his vast knowledge of stuff. Occasionally, this guy says something that genuinely makes you think but that’s not often since he’s usually not interested in connecting ideas or facts; just knowing a lot of them. (disclaimer: I don’t want to bash this hypothetical person, as I myself occasionally indulge in the consumption of random knowledge but I do it just for the lulz. Last week, I was into the Doctor Who universe for no reason).

The author of Create Your Own Economy: The Path to Prosperity in a Disordered World has managed to make a name for himself by being that guy. Tyler Cowen, a professor of economics at George Mason University, is conversant in the most random shit from Iranian cinema to Haitian voodoo flags to music from the Congo (what’s wrong with music from Ghana, bro? Why aren’t you conversant in that shit?). He also has a dining column in the Washington Post called “Tyler Cowen’s Ethnic Dining Guide.” He co-runs the economics blog Marginal Revolution with his colleague Alex Tabarrok. Cowen’s main research interest is the relationship between culture and the economy. In this book, he discusses the role of autism in our economy.

Cowen was inspired to write this book after a reader of his blog wrote to him and bluntly asked him if he were on the spectrum (why doesn’t anyone write to ME to ask if I’M on the spectrum?). This apparently got him thinking about and researching autism and he started to think that he processes information in a way that is very similar to autistic people, as if he would know. This led him to write a manifesto (and I use that term loosely) on how autism, or at least the concept of autism, could influence our economy. The result is something with content that’s quite broad for a book that’s less than 250 pages, with the last chapter given a rather grandiose title, “The Future of the Universe.”

While the content is engaging and the writing style is fairly accessible, the execution is quite sloppy and feels very rushed. He makes a barrage of points but brings very few of them to a logical conclusion. For example, he starts to say something about how autism relates to Buddhism in a way that makes you think he’s going somewhere and then abruptly ends that train of thought (TRAIN? WHERE?), possibly assuming that we’ll just connect the dots ourselves, which is irresponsible if you think about it, especially if a reader were ignorant on both Buddhism and autism. Though I love a point that he made in the chapter on Buddhism that I will get to later. But as atrocious as the execution is, I think that he actually touches on some points about autism that I wish more people had addressed.

The main argument of the book is that our society is becoming more ‘autistic’ and this could have a tremendous benefit for our economy. The first half of that sentence is not far from the actual epidemiology of autism: the odds in the 1980s were 1 in 1,000 and now it’s up to an eyebrow-raising 1 in 50 (I believe the stats were somewhere around 1 in 88 when he published this book in 2009. I’m probably wrong about that but I’m certainly not far off). He points to ‘autistic’ tendencies in society, all of which are facilitated by the latest technological advances. We can conduct independent research on the Internet, make our own ‘playlists’ in iTunes, get personalized recommendations on Amazon, etc. In short, we use technology to construct a personal world of meaning and we organize it within an inch of its life. Much like how autistic people manage to construct their own mental world, many ‘normal’ people are more able to construct their own realities by becoming deeply immersed in their personal favorite topics. People have been able to do that before, of course, but technology is making such an endeavor more accessible than ever. All you need is a computer, Wi-Fi, some free time, and the realization that the Internet is more than just porn.

Our society is becoming more self-centered, offering more freedom of choice for the individual. Rather than using technology to replace or wipe out certain abilities like one-on-one interaction, as some technophobes would argue, when used best, technology acts as a true extension of oneself and becomes a tool of self-actualization rather than oppression. Everyone gets the chance to self-actualize and in turn, we become more capable of contributing to society in unique ways. (For the many people who complain that the book’s title is misleading, that is what he means by “creating your own economy”; he simply draws heavily upon autistic people as a source of wisdom. *blush*)

My favorite chapter is “Autistic Politics,” as it is the closest thing to a philosophical statement on autism that I’ve read (there’s still that organizational sloppiness that’s apparently characteristic of this book. For a man who talks about mental ordering a lot, his writing organization needs serious work!). He reminds us that autistic people, given the way that their brains work, are less susceptible to bias, false memories, and other teasing, terrible woes of the normal brain so we are more able to see the world as it really is. In addition to that, autistic people, if they’ve received a formal diagnosis like I have, have a lot of experience being a part of the out-group, being put down because we are perceived as weird or different. Because of this, the more self-aware among us are not interested in being a part of the in-group or cultivating a hive-mind or nationalist mentality since we become suspicious of people who think that way. We “attach weaker moral importance to the boundaries of the nation state than do most other people” (196). I can almost confirm this, except he does paint a rather rosy picture and I feel that he romanticizes autism too much.

In the chapter “The Buddha as Savior and The Professor as Shaman,” in what I believe to be the highlight of the book, he makes an illuminating point about autism and extreme focus, using Sue Rubin, an autistic woman obsessed with spoons, as a foil for the Dalai Lama:

“Oddly we call these tendencies glorious when they are affiliated with Eastern religion but we call them pathological…when they are performed by autistics. I genuinely wonder why we do not accord Sue Rubin the same respect that we grant the Dalai Lama. He’s had to work very hard at what she can do quite naturally and skillfully.” [sic] (93)

BOOYAH. ANOTHER DOUBLE STANDARD EXPOSED. Personally, I’d love to hear what the Dalai Lama would have to say about autism. He has expressed interest in working with neuroscientists in the past so autism is only a stone’s throw away at this point.

All of this said, I still feel weird about Professor Cowen’s characterization of autistic people as human computers. This characterization is flattering to a degree but I don’t want people to get the impression that we are merely freaks of nature who can spend hours memorizing obscure stats or practicing very specific skills, especially considering that this is what ‘normal’ people do too. Professors and teachers are hired to be highly knowledgeable on a certain subject and you’d probably say that the majority of them are not autistic. In addition, some people spend their lives specializing in a very specific trade and you probably wouldn’t assume him or her to be autistic. I once worked with a guy whose specialty was carpet installation on yachts and as I watched him teach his apprentice all the nuts and bolts of carpet installation, I thought that he may be autistic but he seems too normal otherwise.

This book is fine if you’re looking for an introduction to the capabilities of the autistic mind but that’s it; it’s a superficial gloss with occasional flashes of brilliance at best. Ultimately, for a manifesto (with a uniformly red cover that I hope is just an accident), he doesn’t seem to deviate much from the conventional wisdom regarding autism, but as a neurotypical who has claimed to have had an easy life, he’s not in a position to do so anyway. Like a literary version of a TEDTalk, this was something that seems really captivating as you immerse yourself in it but, upon an iota of further reflection thereafter, you realize that it actually does little for the subject at hand. Cowen opens a bunch of doors, most of which needed to be opened, but instead of actually traveling through any of them and coming back with fascinating stories and facts (like this cool lady does), he gets caught up in how smart he thinks he is and makes ‘educated’ guesses as to what’s on the other side, à la Jonah Lehrer and the rest of the journalist-as-sage-instead-of-journalist-as-translator literature that’s apparently what the cool kidz are reading these dayz.

That said, each chapter could easily become expanded into its own book, particularly “Autistic Politics,” which I’d certainly write if Professor Cowen won’t pick up the slack.